My last post was my 100th post. I didn't even notice it. I guess that goes to show how fast things are moving these days. It's been feeling almost balmy here and this is such a wonderful thing because I was feeling so blue to be cooped up indoors all day every day. I'm sure it will not last, though when we were further East it certainly felt Springlike much sooner in the winter and I can't tell you how much I loved the way the city would fill our apartment in the winter. It made being inside seem like being just behind the curtain on stage to hear the rattling of the trucks on the freeway echoiing into our little space, filling the walls with the humming noises of someone else's adventure.
Little Berry loves being out of doors with me, brings me her shoes and my own, her jacket, the keys, just to get my attention that she wants to go walk. When it's bitter cold though she doesn't want anything to do with it, and squalls to be picked up so she can tuck her face into my neck and poke the freckles on the side of my face. She calls them each a "ball" though, or somedays, "murse?" which is Little Berry for nurse and I have no idea why she thinks my freckles are going to yield milk.
I'm in desperate want of a bicycle, I want a lovely vintage style one that's on display at Target and a sweet baby carrier that goes behind the seat. I've been spying on them at the Thrift stores and have found a few contenders but they all need work and they're not that much less than a new one here. So I'm saving my dollars and waiting, and when Spring comes and I have a summer to look forward to on flat roads of rural Mississippi (or Arkansas, who knows?) I will buy my bike and buckle in my Little Berry who by then will be quite a BIG Little Berry, and we will ride.
We're having that language explosion age, I've been warned about it before but it just slipped away from me that this is what's happening, until this morning I was putting laundry on the clothesline and she was standing a few feet away pointing at the sky and saying skyyyyeeeee? followed by burrrrd? 'reeeee? (tree)and turtle? In the past week or so, she's learned mouse, and keys, and socks (shocksh?) and cow as well as that cow's go Mooooo?! and points to their udders and says "Murse?". She can say Pig (pigsh!), which sounds a lot like her enthusiastic "fish!" and snort when she sees their picture. She spots airplanes in the sky that look like mere pinpricks in the clouds and shrieks about them until they've again faded into the mystery that is a cloud. This morning I was telling her something and I said the word "one"- I think I said "oops! That's only one shoe." And she said: "Two?" but she usually gets pretty lost after four.
I have two pieces to her little kitchen set painted a pretty white, and am waiting to paint the last, the stove. It is somewhat tedious because my minutes to do it are spare but the reward is great. She loves it immensely and has been pilfering from my silverware drawer every few minutes to play whatever games it is that gets her so wrapped up and immersed in taking things out and putting things back in again. I've decided to try my hand at making toy food for her. I have plenty of felt wool but I don't like the feel of wool toys enough to do that, so I've decided to use pre-knitted fabrics, like organic cotton sweaters I picked up at the thrift stores in heavy weight yarns and cut them apart to make them from. I will post photos of this when I'm done as well as a tutorial if I succeed.
Here's something to think about until I post again:
Which is cutest?
Little Berry, last January 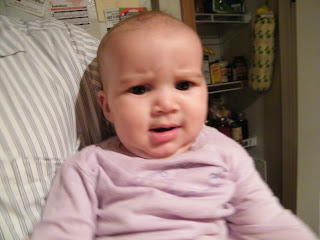 OR: Little Berry this week 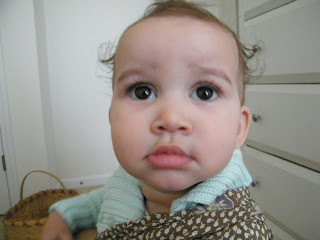