This is the final part of my birth story with Little Berry. For the first installment, see here .
Around noon on August 4th, I was still laboring hard. My water had still not broken, but I was having strong contractions every three minutes that I could not talk through. I was using the shower for 10-20 minutes at a time and it really helped. At one point, I began to feel guilty about the water usage and came out of the shower. My midwife suggested I use the birthing tub, and filled it for me. It was bad timing.

Pappa Starbucks was at home (remember, it was just around the corner) to walk our dog. I was exhausted so she filled the tub for me and I got in, leaving me alone. I felt suddenly and intensely overwhelmed by how alone I was and I started feeling tense, upset, perhaps even scared. I felt hot and painful and angry and loathed the birthing tub, although I think if I had tried it again with Pappa Starbucks there to would have been able to relax and enjoy it. I got out and put my headphones back on, listening to the same song over and over. It was "Crazy" by Seal and I had been using it throughout the morning. Something about it helped me relax and I kept it on repeat. I bounced on the birthing ball, tried the birthing chair, and when Pappa Starbucks returned, I was exhausted and realized I needed sleep. I had thought there was no way I could sleep in labor but I did-for almost an hour I was in a heavy hard sleep that was lucid and also very deep. When I woke up, I felt like I was coming out of a trance and I began laboring hard again.
I know my midwife checked me and I was almost fully dilated. I tried the shower again and I remember standing under the sharp splattering of hot water, the sound of running water filling the room, when I entered the third stage of labor. I wanted to push, I needed to push, but I was in the shower alone and there was no one else there to keep me from falling. I had a vision of responding to the urge to push and then slipping and hitting my head, or of the baby falling down the drain, a bizarre frantic airless panic sank in. Looking back on moments like this I wish wish wish I had sought out a doula. I could have used someone throughout my labor to just "be" with me. I was alone a lot. My midwives were busy with another mamma to be who had arrived (they complained about her while I was pushing!) "only two centimeters dilated and already screaming."
I crawled out of the shower on my knees, found a towel, and went back to the pretty yellow room that was around the corner. I think if I had not been alone in the shower I would have probably given birth rather quickly standing up there, it felt natural, compulsive.

When I went from the rushing water to the quiet yellow room I also felt tense again and instead of still needing to push, I began walking. I spent about 15minutes walking, my contractions very strong and consistent. I was on my knees breathing in and out to Seal when my midwives started insisting I try different positions. They were tired I'm sure. It was about 3:00 in the afternoon and I had been there since about 8am. It occurred to me that this is going to happen soon and I'm almost there!
I know I was anxious. I felt very unsupported. I'm okay saying this now, I've worked through most of the feelings I have about her birth. Writing these things down for me is the last step in moving past the sorrow I have over what I expected versus what I experienced. Not all births with midwives and "natural birth centers" are peaceful or beautiful. Not all women who choose unmedicated births have support teams and I was one of those women.
My midwives were fairly aggressive during the last stage of labor and the 45minutes I spent pushing. They held my legs, they told me when to push, they moved the lip of my cervix back forcefully without asking if I wanted them to. They massaged me forcefully with olive oil and never once asked if I wanted them to. And I didn't have the energy, knowledge, stamina- to tell them they were hurting me. I wish I could have that hour back, I would do it differently, I believe firmly that these are all interventions, that left on my own I could have found a natural position (rather than flat on my back, really, the most unproductive position) and I would be sharing different words.

But I lay, and I pushed and I cried, and I yelled words about how "I DIDNT WANT TO BE PREGNANT ANYMORE!!!!" And after this feeling of immense anger and solitude passed,
I breathed in and pushed down down down through the end of the world and out into the spinning light of a yellow room I birthed my beautiful daughter whose cord was tucked in spirals around her neck, where Midwives clamped it and cut it even though her pappa had asked to do it himself, and lay her on my chest to learn how to breathe.
We went home that same evening around 9:00, 4 hours after she became my daughter, little berry was safe at home, in a small apartment on a pretty street that will always be a little special, it was where I began to feel like a mama. 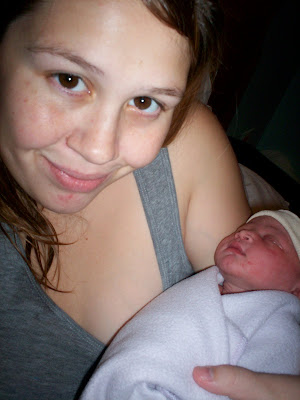 I was in back labor, so the midwife wrapped a sheet around my tummy to help Little Berry turn. This caused the contractions to feel extremely intense and she did turn later but not until I was enjoying a hot, hot shower.
.....to be continued!
Posted by Mamma Pie at 7:18 AM 2 comments:
Email ThisBlogThis!Share to TwitterShare to FacebookShare to Pinterest
Labels: birth story, labor and delivery, Little Berry, mamma pie, natural childbirth, Pappa Starbucks, pregnancy, unmedicated birth
Newer Posts Older Posts Home
Subscribe to: Posts (Atom)