What follows is a post my sweet, lovely mama friend Jen Green, who most of you know as @Jenners26 on twitter. I am fundraising for to help with medical bills& maybe even allow them to have some semblance of a normal Christmas for their five children. Her daughter Elle is one of my favorite people ever and I appreciate all of you who are pitching in to help them out. Jen hasn't asked for anyone's help, but with the fact that their landlord recently decided to sell the house they're renting& is making them move, her husband's ER visit (which she talks about below) and Elle's medical bills, they won't be able to do this all alone and I don't think they should have to. Please give what you can, and share with anyone you think can help them too.
You can donate to her via Paypal (just mark it as a 'gift' so she doesn't get charged fees) and feel free to enter the raffle I am holding as well, which is here.


From Jen:
Thursday morning at 3:30 a.m. I woke up to a very adrenaline-inducing, "JEN. GET UP." from the next room. It's my husband. And after I stumble to the living room, I find him sitting on the couch, holding our 3yo daughter. She's limp in his arms, but her eyes are open and she's staring blankly at the ceiling.

"Something's wrong with Elle," he says. I say her name a few times, and stroke her hair. She doesn't respond.

"Is she sleeping?" I ask. But her eyes are wide open, and she doesn't respond when I rub her tummy.

Finally, she looks at me. I take her and hold her, and ask her a few questions. She knows her name, and my name, and seems to know Shawn but won't say his name. I ask him if he thinks she may have been sleep-walking. We're both scared and unsure.

Suddenly, Elle says she has to throw up. I take her to the bathroom, and stand her in front of the toilet. I'm holding her at a weird angle and I ask her if she's okay to stand up and she says yes. I let go of her, and as I do, her entire body stiffens, and suddenly, as if her right side is heavier than her left and she can't bear the weight anymore, she stiffly falls over to the right and smashes her head on the bathtub. The sickening thump of her head hitting the tub is something I'll never forget. And my fear is only worsened, as my tiny girl, who cries at a hangnail, doesn't respond to the pain of the fall. I grabbed her instantly and rush her back to the living room. I'm holding her and Shawn is sitting beside us, and we're trying to get her to talk to us, but she says nothing. I tell Shawn we should call 911. We're both terrified, and I plead with Elle to talk to me.

By this point, her head is turned to the right as far as it will go, and her eyes are locked as far to the right as they can look. She's not blinking and I'm terrified that I'm holding my baby as she's dying. Just 24 hours earlier, Shawn and I had made the heart-breaking decision to terminate my 5wk pregnancy. We have five children under the age of nine, and my debilitating pregnancies leave me unable to care for the children we have, so we make the choice that our family is complete. But now, as I hold my non-responsive toddler, I'm pretty sure that a god I don't believe in is punishing me for that choice by taking away my child.

Just minutes after Shawn called 911, a police officer arrives. This is the second time in a week we've had to call 911. Just a few days earlier, Shawn had been in the backyard and was bitten by a couple of fire ants and went into anaphylactic shock, prompting him to enter the beginning stages of cardiac arrest. And now, here we are again.

The officer checks Elle out and says he thinks she may be having a seizure. The cop turns the lights off and another cop arrives. He agrees it looks like a seizure. Shawn is holding Elle at this point, and she still hasn't moved, but begins to vomit. He turns her so she doesn't aspirate on it.

EMS arrives, and Shawn explains to them what had happened; He'd gotten up with her because our older daughter had woken him up and said that Elle was complaining she had to pee. He went in to get her, and she seemed "off." She did a weird shuffle walk to the bathroom, after she peed, it seemed like her right arm wasn't working, and she couldn't seem to get her hand up to flush the toilet. Then she couldn't seem to find her way to the bedroom and had wandered to the living room. He sat down with her and she slowly became non-responsive. She didn't know his name, and kept saying she wanted to go home. Then she was pointing at the tree mural on our wall and mumbling, "JjjjJjjjJjjjJjjj."

That's when he woke me up and I finish relaying the story to them. They stick me and her on a gurney and into the ambulance. Within just a moment, one of the EMS workers shoots a syringe full of clear medicine up her nose and she finally "unlocks" her eyes and neck and seems to come out of it. Total, she was locked up for over 15 minutes.

They start an IV and Elle seems to be sleeping through it, while ocassionaly waking up long enough to vomit.

Once we get to the ER, she's seen by several doctors and they order a CT for her. The nurse floats words like, "brain tumor" and my fear is only worsened.

Around 6:30 a.m. the pediatric neurologist comes to see her. He orders an MRI and an EEG and a slew of lab work. For the first time, I hear the word epilepsy, and my mind panics. Elle has severe food allergies: dairy, eggs, peanuts, tree nuts. She's my spunky, rough and tumble girl with a personality too big for her body, which now seems too fragile and vulnerable to contain her. 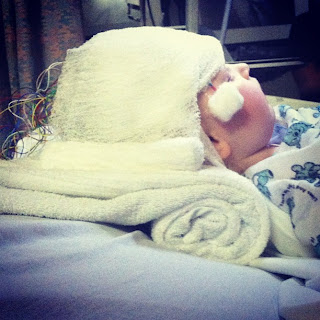 The next 12 hours are spent carting her from test to test and watching endless episodes of Sponge Bob in between.

By late that night though, we have an official diagnosis: Epilepsy.

In the coming weeks we'll have pediatric neurologist appointments to help us formulate a plan. She'll be on medication twice a day from now until...who knows when. We have emergency meds to give her if she gets locked into a seizure for more than 2 minutes. Which is comforting, because at least we'll never have to know the panic of a 15+ minute seizure again.

But with the ambulance ride, and the expensive brain scans, the specialist visits, and the ongoing medication, we're looking at 5-figure medical bills. On top of that, and Shawn's trip to the ER, the homeowners of the house we're renting have decided to sell it, and we have to move out by the 31st of this month.
We're trying hard to keep from drowning over here, and I can't tell you how much it means to me that Marybeth is kind enough to run this raffle, but that you all are kind enough to enter. Your generosity and love are what keeps us going.

Posted by Mamma Pie at 12:27 PM 8 comments:
Email ThisBlogThis!Share to TwitterShare to FacebookShare to Pinterest

Raffle to benefit Jen and her family

UPDATE (12/22/2012) Raffle is closed and winner has been contacted! Thank you all for entering!

This raffle is to benefit Jen (@Jenners26 on twitter) and her family who have been having a really rough time lately. You have the chance to win one of several prizes (one from my own Etsy shop) which would make a fabulous Christmas/Solstice/Hanukkah/Kwanza/Festivus gift for your children or grandchildren. To enter, simply donate to the family via paypal (which is included below in the Rafflecopter widget) and then leave a comment letting me know you did. You do not HAVE to donate to enter the raffle but as all funds go directly to the family, I think you will.