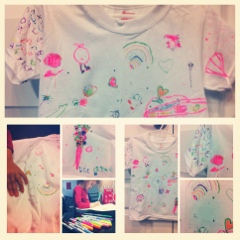 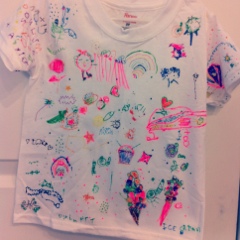 We had a bag of plain white Tee Shirts sitting around that I kept meaning to do SOMETHING with, maybe kidpossible glue batik or freezer-paper stenciling? Anyway, Little Berry kept saying she wanted to "make one" for her bestie back in NC. I may have tuned her out at first, but she's persistent and asked again+again. Fortunately I finally asked what she had in mind& she informed me she wanted to draw on it. The only permanent drawing implement I could think of we're Sharpies, so I pulled them out& she went to town. Occasionally I made suggestions or clarified how to spell a word-but mostly this is all her. My friend K suggested doing this as a party-favor idea at a b-day party, and I think it would be fun to do one for all of us & have a family photo taken in them just for kicks. The benefit of letting your kids actually draw right on the shirt over glue batik and stenciling is that they can make much more detailed pictures on the item, have better control over it, and require much less supervision on your part! 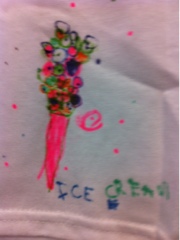 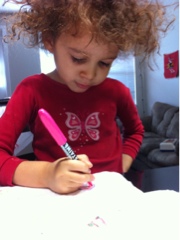 In any event, all you'll need is a blank white tee shirt, sharpies- there are "fabric" sharpies available now called STAINED by Sharpie (we own 1, lol) but I recommend just using sharpies with wide+fine tips (we had more fine-tipped ones than not, and it was tricky for her to color things in fully), and clothes you don't mind your kiddo getting ink on (as well as a surface to color on that won't be ruined by the markers accidentally getting on them).
And let your little one go at it! I've been told tossing it in the dryer&/or ironing it on the highest setting with no steam helps make the design last longer, and I suggest encouraging your little one to take breaks and come back to the shirt later if they're getting frustrated or running out of inspiration. It's easily a project that could be spread out over a week. 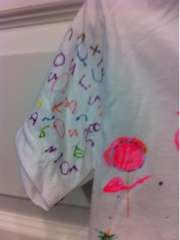