Mama Christina from Diary of a Mom gave me a bloggy award! I am so flattered as it's my first!
The rules are: 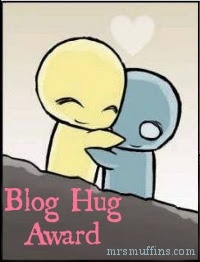 One: Tell us about a memorable hug you’ve had. It can be a person, pet, whatever…
Two: “Hug” at least one other blogger or as many as you like.

Wow, this is very hard for me. As many people know, I'm not a hugger. I'm not touchy-feely or lovey-dovey, and I have to remind myself to give physical affection, even to Pappa Starbucks. He, however, is very very much a hugger and is always asking for them and so is Little Berry. I think this will be a good exercise for me to write about hugging though since I've been trying to work giving them more....eagerly?
On my 20th birthday, Pappa Starbucks and I were meeting for breakfast. We were in college, we knew each other fairly well but were not involved. He was gushy-mushy-lovey-dovey-always-grinning around me and I knew he liked me a lot. One of the reasons I was at that point hesitating to date him was actually because of how exuberantly affectionate he was.
I got up that morning, showered and dressed in my favorite button down plaid shirt that my best friend always picked on me for wearing (good naturedly of course) and fixed a bowl of very crunchy granola to take to breakfast even though we were meeting in front of chic-fil-a (he's vegetarian and I didn't eat meat in front of him for a very long time) so I wouldn't be chowing down on a chicken biscuit while he ate his frosted flakes or oatmeal.
It was a chilly and frosty-aired morning, and I walked from my dorm to the cafeteria to meet this silly guy- trying to make sure my hair wasn't all frizzy from the sweater I was wearing, and generally wanting to look good but not have anyone know I was TRYING. It was, after all, my BIRTHDAY.
He met me inside the cafeteria with a cheerful grin and leaned in to hug me- "Happy Birthday!" he said. He smelled like Tide and toothpaste and I realized I had flutters- genuine nervous butterfly flutters in my stomach at that moment, and I knew we'd be together for a long long time.
And we've been together ever since!
Part Two:
I hug Ittybits and Pieces, The Milk Maid, Erin, Milk Donor Mama, and last but never least, my Friend Monica!
Posted by Mamma Pie at 10:24 AM
Email ThisBlogThis!Share to TwitterShare to FacebookShare to Pinterest
Labels: birthday, dating, friendship, hugs, love, Pappa Starbucks, school, university life, vegetarian