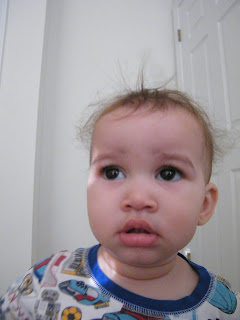 Today my Little Berry is 16 months old. She's so big, and such a baby all at once.
She is still not much of a morning person (see above photo for proof) but I'm in love with this age, this stage of development, with all of its words and even its frustrations. This morning she got angry ANGRY because she wanted so desperately to dress herself and isn't capable of doing it all at once, she just doesn't have nthe motor skills for it, but you should have seen her try. She was intense, desperate, breathing heavily, picking up her foot with both hands and trying to poke them into her pants. In the end she settled on letting me put the pants on her that she picked out because any other pair? Elicited shrieks.
And she tries to read, pointing at the words on the page, making up garble about them. Everything has a name whether she gets it right or not, but boy oh boy does she try! A few weeks ago she started saying "airplane!" and now everything in the sky- from the moon, sun, birds, clouds, to airplanes themselves are pointed and called out as such.
If we're in the kitchen, she drags over her high chair and waits to be fed, grinning, and making messes with it whenever it's placed in front of her. She's very sensory oriented and specifically, loves feeling, touching things to see what they do.
She rolls her eyes when she doesn't like what we're telling her. She's been doing this for about three weeks and it's simultaneously hysterical and absurd.
I bought a vintage quilt recently at the Goodwill and she has spent so much time while we nurse stroking it, pointing at different images, licking it and right this very moment she has her whole face plastered against my computer screen watching the letters be typed and saying NnnnnOSE!
My girl, she is a joy.
Posted by Mamma Pie at 9:23 AM
Email ThisBlogThis!Share to TwitterShare to FacebookShare to Pinterest
Labels: 16 month old, baby, daily life, family, food, Friday, Little Berry, love, mamma pie, nursing, winter