Woe is the dog 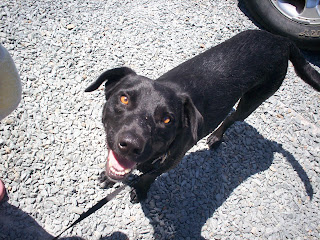 When Pappa Starbucks and I were just "us," we had plenty of time for, well, you know, doing things. Before I ever moved in with Pappa Starbucks, my dog Oreo did. I was in a dorm, and he was in this really great apartment, and Oreo was living outside at my brothers house, so. I sent him off to live here with Pappa Starbucks (then known as The Stud), and he needed SOOOO much attention. First of all, he was suddenly living INSIDE!! And on top of that, we battled worms, and fleas, and ticks, and leash behavior, and yet for some reason, he thought it was great.

This was a fairly nice apartment (that we obviously can't afford, NOW), with a pool, and two dog parks on the property. He went to the dog park for AT LEAST an hour every day. There was no car seat or stroller in the back of our car, and we bought treats weekly and fed him the best food. I even made his food, because, you know, he was my baby.
We went to Petsmart for fun.
The piles of laundry on the bed? Yes, we let him snuggle in them, because he got a bath every Thursday (despite the fact that he had a very nice comfy dog bed too).
But today, I am sitting here looking at a very different dog. We still love him, I think, but the treat jar hasn't been opened all week (just because I don't think to give him treats, not because I'm mean), and he has had TWO baths in as many months. Actually, I think that's still impressive.
As for exercise, though I know it is very important, well, it's also a pain to do right now. And so he gets very little of it. I've made him treats, believe it or not, since she was born. They were supposed to be cookies though, so that may not really count.
Because our car has a humongous and wonderful stroller, a diaper bag, a car seat, and well, US in it when we go somewhere, the dog park is just not worth hauling ourselves away to.
Three days before Little Berry was born, someone (I had never even met before) offered to come and take The Dog to the park after she was born, you know, with their dog too- and I thought I'm not letting you take off with my sweet puppy!! I don't even KNOW you!!
Well, I just dumped out the contents of my purse looking for their number. In the best possible way, of course.
Posted by Mamma Pie at 1:39 PM
Email ThisBlogThis!Share to TwitterShare to FacebookShare to Pinterest
Labels: daily life, Oreo, pets